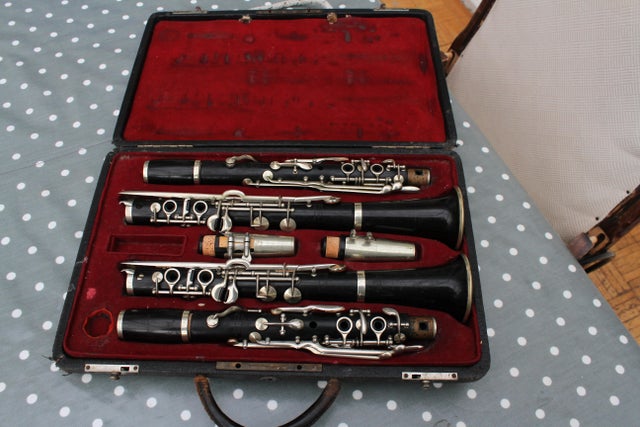 The Barrett action was much favoured in Britain largely due to the strong endorsement of George Clinton, who was Clarinet Professor at Kneller Hall, the Royal Military School of Music in Twickenham during the early years of the 20th Century. It continued to be much used right up until the 1950s in GB. Part Ryan, famously Principal Clarinet of the Halle Orchestra, was probably the last well known classical player, but some Jazz players still continue to use them. This pair belonged to such a player, now sadly deceased, and these are a commission sale for Clarinets Direct. E J Albert was the leading maker of Simple System clarinets in Europe, and indeed, so successful were his clarinets, that his name became synonymous with the simple system here. The Barrett action allows for a dual function first side key, which produces both D#/A# and F/C when used in combination with LH 1& 2 and LH 1 respectively. It is one of the most advanced Simple system designs. The makers stamp E J Albert is present on all pieces, with the all important 6 pointed star, as well as that of J Heyworth & Son, London, who was the GB importer for Albert clarinets.

This pair have just undergone a complete and full restoration with tan leather pads fitted throughout, and are sold with our 1 year warranty. The Bb has slightly mismatched serial numbers the upper joint is 11138, the lower 11140. There is also a crack to the receiver tenon of the lower joint, but because this is metal lined it has absolutely no effect on the playability of the clarinet.

The A has matching serial numbers 11415, and has no cracks or damage. 2 m'pieces are also provided, both play well, one of which has an E J Albert stamp. For instruments which were most probably made in the 1920s they are in very good condition, and the German Silver key work is excellent. The original case shows much wear but still latches securely.