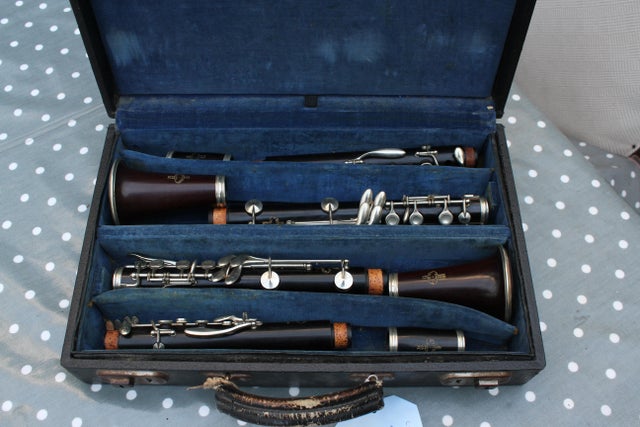 A rare, and possibly unique, matched pair of early Selmer clarinets. These instruments are plateau in the right hand only, and given the mid 1920s date of manufacture, may well have been a custom order for a player who sustained injury in the Great War. The pair are in superb condition, and it is believed were once owned by the legendary Ted Planas, who was for many years the Selmer agent in the UK. The case has a label with John Coppen's business address, and, after Ted's death, John handled the sale of his collection. The last owner was an extremely successful top London professional, who had one of the largest collections of clarinets & saxophones in the business.

The Bb has matching serial numbers throughout 7092, as was sometimes the practise at that time the parts are serial numbered throughout. The instrument is in pristine condition, with no cracks or damage, the wood throughout is in perfect condition, with the main pieces in Grenadilla and the bell in Cocus. I believe that many manufacturers in the 1920s thought a Cocus bell imparted more "ring" to the bell notes. The German Silver keywork is in excellent condition, and the pads, whilst used are sealing well.

The A, S/N 7093, is in a similar condition, the early Selmer logo stamps are still bright, as when the the clarinet was made. Both instruments play with a sweet even tone, at A=440 Hz with modern m'pieces. It is easy to see, after playing them, why Selmer became the dominant manufacturer of clarinets worldwide in the 1920s and 1930s. The case is used but fully functional. The next, fortunate owner of these clarinets, will have the chance to own a pair of some historical importance, even the Shackleton collection has no instruments of this type.