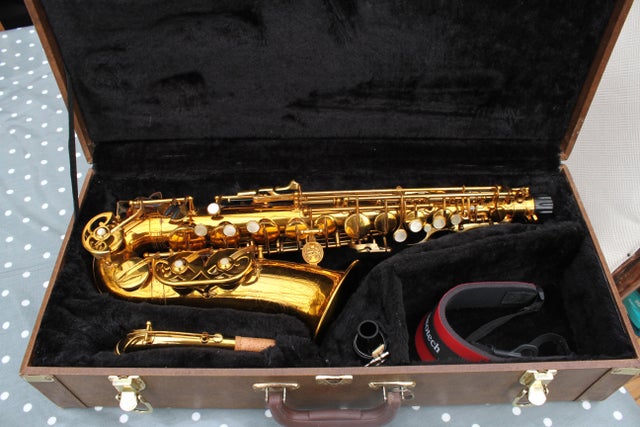 A Buffet Super Dynaction Alto Saxophone, which is a commission sale for Clarinets Direct. Though primarily known for its clarinets, Buffet also made professional saxophones. Buffet Saxophones are probably amongst the most under-rated in the world. Certain models of Buffet Alto Saxophone were particularly highly-regarded for Classical playing. One was the S1 (particularly the copper body version), and the other was Super Dynaction. Daniel Deffayet, the well known French player played one, as did the American Jazz player, Art Pepper. At the time they were made, the Super Dynaction was more expensive than a Selmer Mark VI. Some players feel that the Super Dynaction tunes better than Selmer Mark VI. Alto Saxophones often suffer from a flat and dull middle C# and the a sharp high C#. Buffet devised a unique correction mechanism which works well to cure this: It opens a tone-hole to lift and brighten middle C#, making it better in tune. It also detects when the octave-key is engaged, & the correction tone hole remains closed, so the top C# is lowered. The advantage of this mechanism is that it is fully automatic. Another advantage is that the Buffet design does not suffer from a slightly sharp middle D, which can be a Selmer design issue. For these reasons, the tuning is outstandingly good.

The instrument has had only two British owners, the first bought it new in 1958, and the second, an amateur has owned it for the last 2 years. The instrument carries the stamp of the then sole British agent, "Dallas". It has been well-used, and was re-lacquered. The serial numbers are 5604. The case is a modern example in good condition, NB pictured only in the first and last photos.