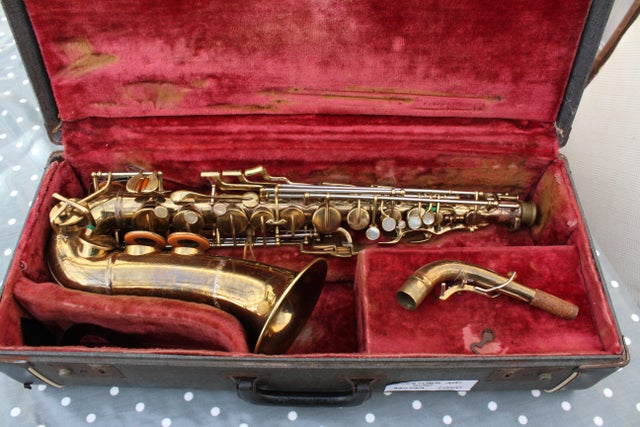 This is a model 400 Buescher Alto saxophone, which is a commission sale for Clarinets Direct. In 1941 Buescher introduced its most popular model, the Buescher 400, featuring a recognizable ‘top hat and cane’ engraving on the bell. This horn also is recognizable by its flared bell, rear low-B and Bb keys, and an underslung octave key similar to the King Super 20.

Formerly owned by a London based professional, this instrument is mechanically sound, and in very good condition for its age. It has received a minor solder repair to the neck receiver, which appears to have been performed to a high standard, and does not impact on its performance.

These horns are known for their excellent intonation and rich, sweet tone. But they can also roar given the right mouthpiece.  The ergonomics are quite good, and when set up correctly, they are light and slick under the fingers. This example has just been completely overhauled, the invoice for which [September 2020] will be included with the sale.