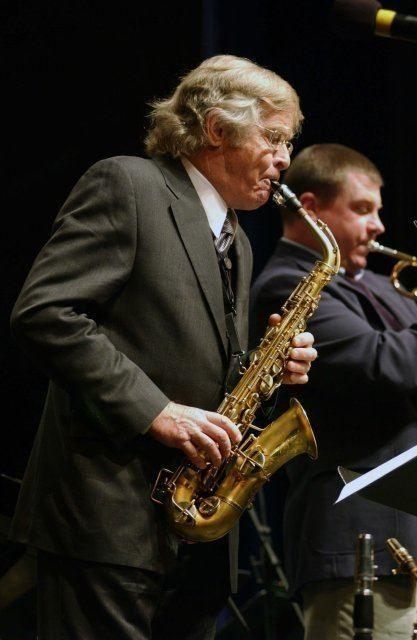 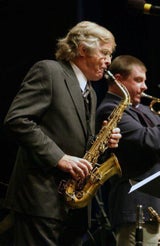 This is a Buescher True-Tone Alto, which belonged to the legendary Bob Wilber. It has a dark sound as the bore is quite closely based on Adolphe Sax’s original design. Gold-plate generally darkens the sound to the maximum. A list of Bob’s musical accomplishments would fill a book. Not many Soprano Saxophonists can say they were Sidney Bechet’s dep. That was at a Jazz festival in Nice in 1948, where Bob appeared opposite Louis Armstrong & his All Stars. Bob was aged about 20 at the time. He also recorded with Bechet. He played with most of the Traditional Jazz legends including: Bobby Hackett (Cornet), Jack Teagarden (Trombone), Teddy Wilson (Piano), etc. He played Tenor Sax for Benny Goodman on his last recording and last tour. Benny Goodman invited Bob to play clarinet duets with him.

This instrument is nearly 100 years old, with S/N 122804, dating to 1922. It shows heavy signs of use, and will need a full re-pad and restoration to be playable. There is a sellotape repair to one of the pad cup guards. Please view the photographs carefully, and in close up mode [ simply select a photo and hover your mouse over it]. The Alto has a forked Eb mechanism. It is designed to make the low C to low Eb tremolo possible, by trilling the right middle finger only, while keeping the right pinkie on the low C key. It also gives an easier D/Eb trill, because the middle finger is more dexterous than the pinkie. This mechanism only works when in critical alignment, so it is standard practice to disable it by inserting a cork between the pad-cup and the guard of the relevant tone-hole (on the other side).

The extra pearl-key for the right 1st-finger is an alternative trill G/G# which is far more fluent. Start on G fingered: 123, G# key and key (which closes the G#). Then trill the extra key only.