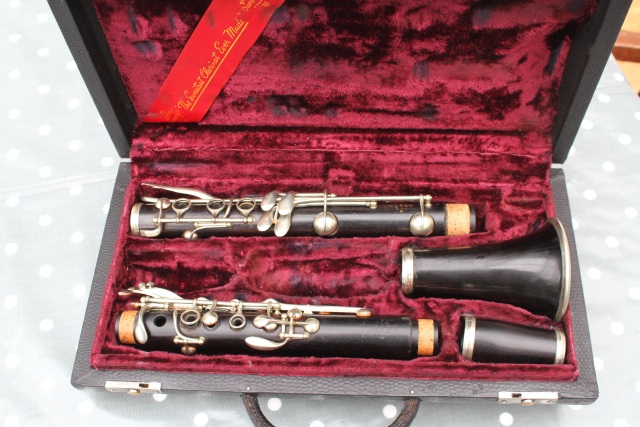 A quite exceptional, and rare, early Buffet Bb clarinet, dating to approximately the late 1860's, which is a commission sale for Clarinets Direct, having previously belonged to a collector. The instrument pre-dates the introduction of serial numbers and features "salt spoon" pad cups. These were first introduced in 1820 and were fitted for the next 40 to 50 years. The Buffet Crampons & Cie stamp in an oval cartouche was introduced in 1869, according to Langwill, which this instrument has. Buffet did not introduce serial numbers until 1885, so these facts makes it likely that this is a very early example.

The key work is of German silver with silver pillars. Originally the pads would have been round cushion kid-leather stuffed with fine wool. Modern tan leather pads have been fitted throughout, which are in fine condition. The clarinet is in excellent condition for its age. There are no cracks o the barrel or main pieces, but the bell has been carefully restored after cracking multiple times, see photos. For this reason the tenon cork fitted to the bottom joint has been deliberately kept to a minimum thickness in order not to stress the bell. The bore measures 14.7mm at the top of the upper joint widening to 15.0mm at the bottom. It is likely that, over time, the bore of the upper part of the top joint has tightened a little. The C#/G# pad falls directly onto the wood of the top joint, the hole is not counter sunk. The 3rd ring finger tone hole of the lower joint in in metal, which we have noticed on early Buffet Eb clarinets, possibly because a wood tone hole rim would have been too thin. The instrument is of "thin walled" type and is lively and easy to play. The clarinet plays with modern m'pieces, but the depth of the barrel tenon is approximately 2mm too short to accept a Vandoren m'piece. With a shortened m'piece the pitch is A=440 Hz, and with a standard Vandoren the clarinet plays at A=438 Hz. The case is a Buffet leather pouchette case dating to the 1960's. This is an outstanding example of a rare and iconic clarinet.